“Sometimes you just need a break in a beautiful place alone, to figure everything out.”

When you need some time to get away, the best way to do it is going into a city you never been to.

I decided to take an international quick getaway somewhere i’ve never been outside of the U.S. With a lot going on I felt that it was time I needed to go somewhere for some R&R, and since traveling is my therapy I needed to jetset.

The vibrant city reminds me of every other metropolis but with flavor and culture. The food, the music, the people, their style really intrigued me before I even visited.

I stayed in a hotel which was a 15minute bus ride outside of the city. I didn’t bother to use a map, but instead asked the concierge what was the easiest way to get into the city. And he told me by bus. I took the 133 which took me right into the city and it brought me into the middle of the area. As I took the bus into the city, I got to see the neighborhoods, and even Colegios as I was on my way into the city.

The bus took me into the middle of the Centro de Madrid, the busy part and major tourist attraction where all the gift shops and shopping is done. I walked everywhere, figured how to get to places on my own by foot. Without using a map, i spoke with the locals, and asked where the suggested places to eat, drink, go to clubs, listen to music, have a cafè and to also relax.

I tend to go into places where the locals go to rather than the major tourist attractions were just to get a better feel of the history and culture of not only the city but the country as well. The madrileños love where they are from, and the Spañiards are proud of their country. They take care of themselves, they have the best food, they love music, and they take in everything that their country has to offer.

I literally had no idea where to go. But walking by foot I was able to find the most beautiful streets, architecture, and the lively culture of the city and was very overwhelmed in a good way. I had to take everything in and be in the moment.

When you get lost you just keep going, figure things out on your own especially when you’re in a different country alone, and Madrid helped me to find a way into seeing what a beauty that this world has to offer. You put all the issues aside and just take in the moment. There are times in our lives where we need a break, and this one was needed. I regained and was able to find myself. 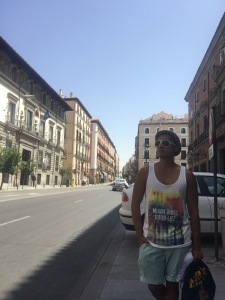 One thought on “GETTING LOST.”