The past year my mentality was ruined, I was depressed, and I needed to change everything around. I’ve been on a little dry spell when it came to traveling internationally so i needed somewhere to go. I was talking to a friend of mine and I told her that I wanted to go somewhere quick. She gave me two options. So I decided on Milan, Italy. But going to Milan made it more difficult for me to head out that way so I needed another option. My mind was still on Italy so I chose to go to Rome.

I’ve been to Rome before and I had a blast. However it was only one full day at that time, and a friend that went with us basically, well let’s just say that friendship no longer exists. This time around I got to spend 4 days in ROMA, and I was able to take it all in. My cousin who now resides in Berlin came to meet up with me for a full day which made it worth while since I haven’t seen him in about a year since we only have a text and social media relationship. I went more on his itinerary which was perfectly fine since he had so little time to spend. What better way of catching up and seeing family in Rome.

This second time around I was able to walk around Rome by foot. And if you’ve been, it was NOT easy. The city is huge, and yes I did walk around most of the time. The majority is made up of ancient ruins and ancient churches which the Colosseum and the Vatican are probably the most famous known landmarks in the world.
I’m not big on history, but I love reading and learning about it because this is why this world is where it is in the present. I’m not going to go too much on it and i’m no history geek, but from my understanding a lot of european history came from the rise and fall of the roman empire. But from what I know Ancient Rome controlled most of Europe as far as up to the middle east. But with a lot of taxes and border control it became more difficult to govern which is why the split of the western and eastern empire. Different empires, Christianity became big, migration, Barbarian invasion, which lead to the Fall of Rome. Because of the fall of the Roman empire, the city of Rome would not become so enriching of it’s history and why this city is probably one of the most beautiful cities in the world.

When it came to visiting Rome my second time around I looked back on the past couple of years. Two years ago, I had this travel bug, and wanted to go everywhere, so I started “Ray Takes Over The World” since I wanted to title my travel life and blog about it. But traveling became so much more than just wanting to go out and explore, it became therapy. And if you kept up with my blog, a year ago it became addicting. And I did not want to have to wait on people so I decided to start traveling solo. With dealing with having no one to really turn to and a loss in the family I just wanted to keep getting away knowing that it wasn’t real, but it was. One of the many aspects we have to deal with life and we learn from them.

We travel to get away from reality but it started turning into coming into terms of life and who I am. I got to see my cousin who I truly adore and never get to see because we’re on opposite sides of the globe. But when he left I was on my own for 2 days. Family is always first. When you travel alone in a different city, you go home becoming stronger and looking at life differently in a better way. My mentality became somewhat ruin and Rome consists of many ancient ruins, which is a gift and a road to transformation. Just like the fall of the Roman empire, the city still went on and if you haven’t been but seen pictures, then there are no words to describe. I’m still working on myself. I’m living my life as if it was the last day. Every act I do I try to make it the last act. And what i’ve learned is I need to take a moment to pause and remember who I am and taking the time to reflect on things that have real and lasting meaning in my life. And that’s what “Ray Takes Over The World” has done for me. Still Doing Me … 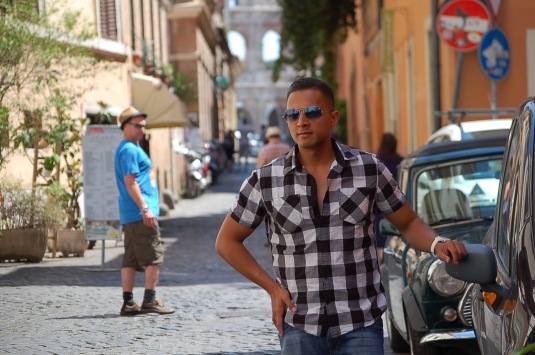 *thank you everyone for allowing me to share my journey with you. Grazie – Amore*